Pretending Not To Panic

US wealth inequality continues and has reached the level where 20 Americans are now worth as much as half the population. The 400 richest own as much as the bottom 61%. The 20 fit on a bus. The 400 fit in a restaurant. While the data may seem extreme, the estimate is considered to underestimate the inequality because, while the wealth of the bottom 61% is relatively easy to track, the wealth of the wealthiest may be greater if off-shore holdings and loopholes could be accounted for. A majority should hold authority in a representative democracy, but change is hindered by the role wealth plays within the political parties. 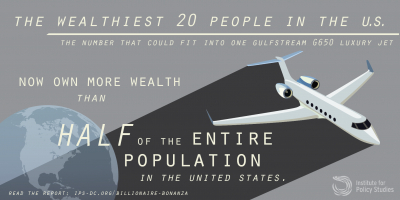 2 thoughts on “US Wealth Inequality Update”